For the seventh straight year, Quinnipiac University will be an official site for the annual Global Game Jam. This year, we will be live streaming to another location in Stamford, CT coodinating with GameDevCT. The event starts at 5pm Friday January 31st, when the theme will be revealed. The lab will be open all weekend. All are welcome!

Update! See all of the games created here!

There is an all GDD Assembly on Friday November 8th at 6pm in the Center for Religion! GDD alum (Ryan O'Hara and Mike Tullo) will be there to give advice on UI/UX jobs, grad school, and releasing your own games on Steam! There will be homemade chili and brownies. Stop by! 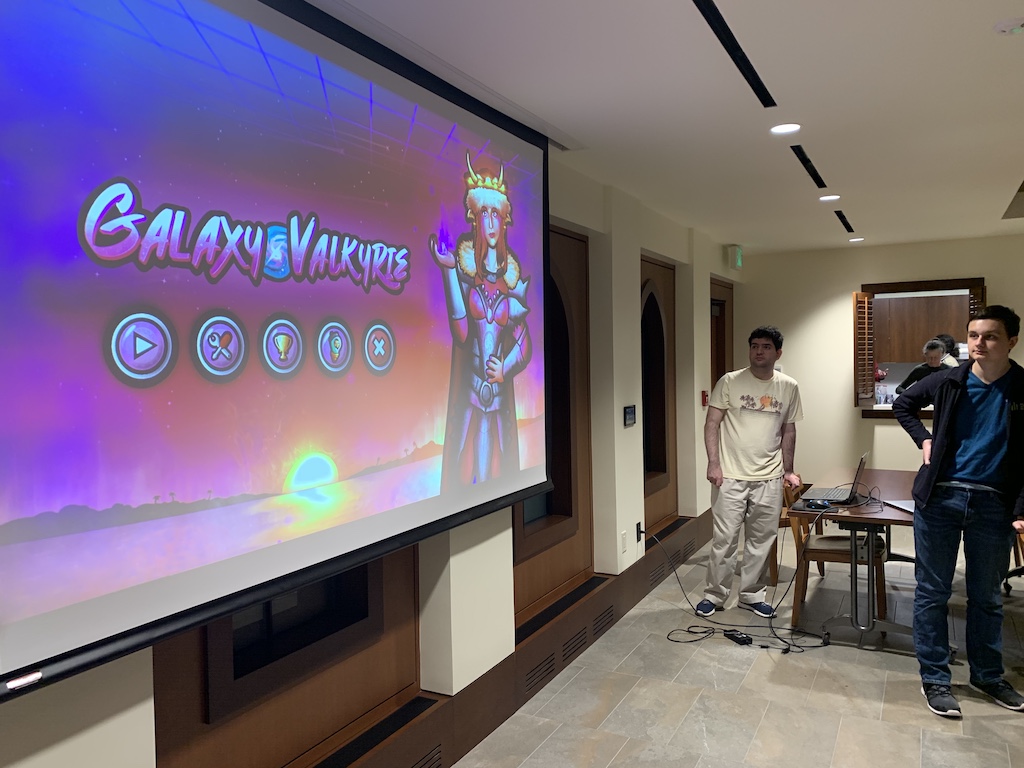 Game designer and Parsons School of Design professor John Sharp will be giving a talk at Quinnipiac entitled "Iterating on Failure: Ten Lessons on Failure-Positive Creativity" at 7:00 pm October 24th in SC-120.

As game designers, we’ve honed and refined a set of processes to help us turn failure into a key ingredient of game design. As powerful as these methods are, there is much we can learn about iteration and its role in making sense of failure. Drawing on Iterate, his co-authored book with Colleen Macklin, John will share ten lessons learned from other creatives—from chefs to skateboarders, filmmakers to winemakers, and toy designers to comedians to see how they manage the inevitable failures involved in their work.

John Sharp is a designer, art historian, curator and educator with thirty years of involvement in the creation and study of art and design. John's current design work focuses on cultural games, artgames and non-digital games. His current research addresses game and play aesthetics, the processes of creativity, and the intersections of aesthetics and ethics. He is an associate professor at Parsons The New School for Design. Along with Colleen Macklin, John co-directs PETLab (Prototyping, Education and Technology Lab), a research group focused on games and their design as a form of social discourse.

The talk is sponsored by Quinnipiac's Game Design Development program.

The second annual one-day Digital Media CT Summit takes place on Friday 9/20 at the University of Connecticut in Stamford. Quinnpiac Game Design and Development will have a booth at the event. It will be a great opportunity for upperclassmen to make contacts and network with local businesses.

Setting up the booth. 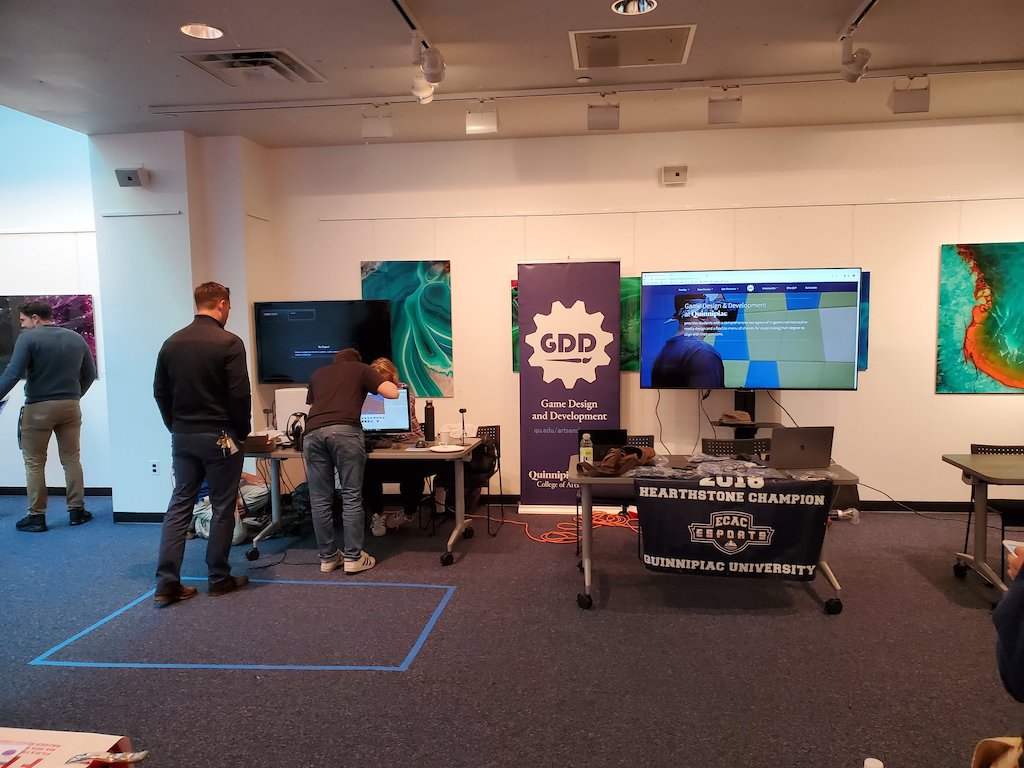 The People's United Center for Innovation & Entrepreneurship at Quinnipiac University is hosting the GameDevCT Mixer Saturday 9/14 from 1:00 to 4:00 pm in the Center's facilities on the Mount Carmel campus.

GameDevCT is dedicated to fostering the growth of the games industry and game development community in Connecticut. GameDevCT holds monthly 'mixers' around the state where developers showcase their games, trade ideas and playtest. Find more information about GameDevCT here. 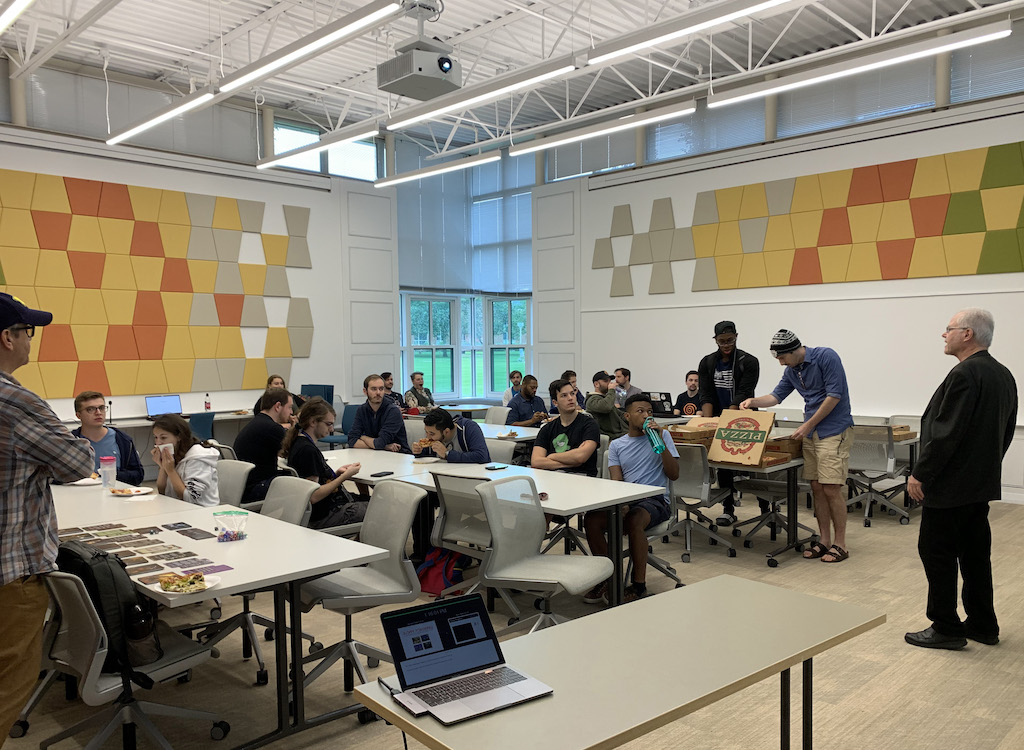 Calling all GDD students! Come to the GDD Assembly tomorrow and meet new students, faculty, alumni, and friends. Show your work, eat some food, and hear about clubs, upcoming events, and plans for the future. Center for Religion (the building next to the parking lot in the CAS quad) 6-9 pm. GDD alumni Donovan Sepulveda (Blizzard) and Mike McMillen (Bethesda) will talk about their experience in the industry and give tips to current students.

Interested in becoming a director or coordinator or teaching courses in app development, coding, game design, robotics or visual arts? Come to an informational session by iDTech in room SC120 this Thursday. 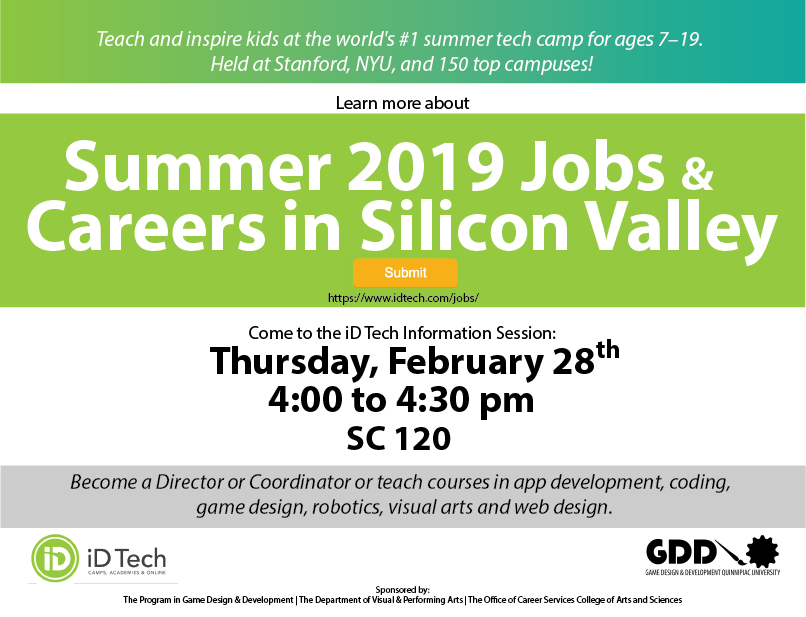 The Reality of Global Climate Change Hackathon (at Yale)

Quinnipiac game design students are invited to participate in a climate change hackathon at Yale, February 8-9th. Contact Professor Elena Bertozzi if you'd like to attend. Information about the event follows:

One way to understand a problem is to look at it in a new way. Join your fellow students, along with climate scientists and technical mentors, for an intense day and a half to utilize virtual and augmented reality technologies to explore themes of global climate change.

Teams will create experiences on themes of global climate change using climate change data sets with virtual reality and augmented reality technologies. Climate change materials - datasets, photos, geo spatial data, etc. - will be provided by the Yale sponsors and external sponsors. Technical mentors and climate scientists will be in attendance to assist with the team work. Bring a team with you, or come alone and get matched up with others! No prior technical, programming experience required. Do come with a passion to learn, explore, and help communicate on the impacts of climate change. Please sign up in advance: https://climatevr.yale.edu

Achieving the Zen of Rapid Game-Making

January 31 at 7:30 in Echlin 101 (aka Kresge Auditorium) Game Designer (and Vice President of the Global Game Jam) Lindsay Grace of the University of Miami will give a talk on "Achieving the Zen of Rapid Game-Making." The talk is sponsored by Quinnipiac's Game Design Development program. Be there! 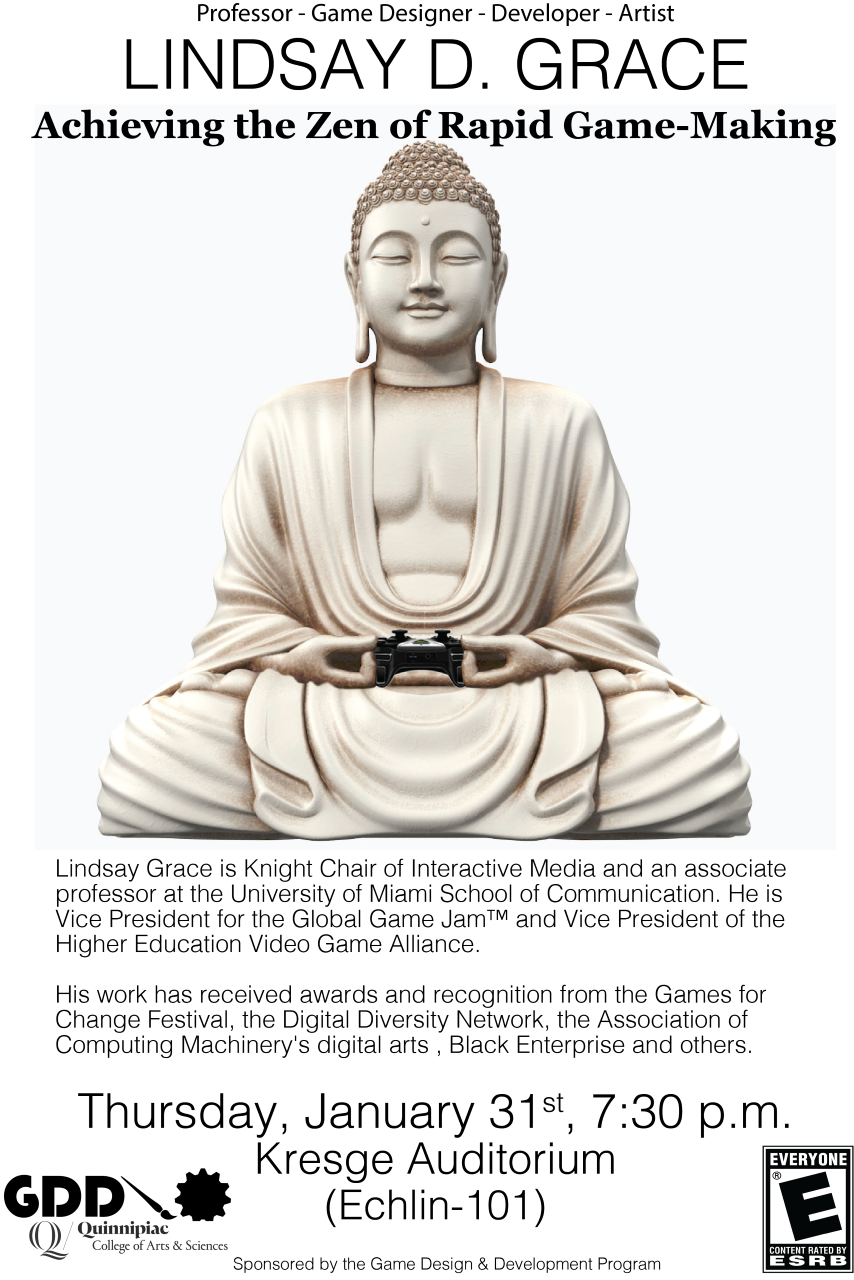 For the sixth straight year, Quinnipiac University will be an official site for the annual Global Game Jam. The event starts at 5pm Friday January 25th, when this year's theme will be revealed. The lab will be open all weekend. Jammers will gather on Sunday at 3pm and informally share their creations.This event is open to the community. All are welcome!

Update! See all of the games created here! 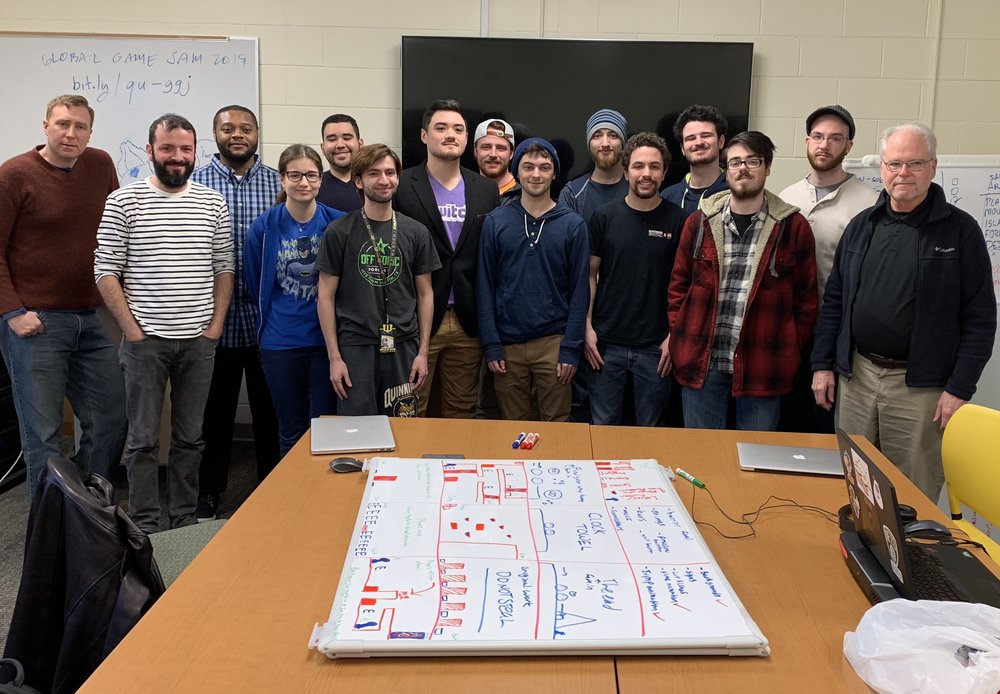